Do you have questions about Tech Bubble?

Log in to ask questions about Tech Bubble publicly or anonymously.

For all you 🐻's on here. Have a look at how "The Armagedonnists" can cost you.

A fun "what if" analysis based on listening + acting on the words of media's favourite 🐻's:

I find it good stuff to reflect on. Because the doom stories are mostly very convincing and loss aversion is very real, especially the older one gets (less time to make up the gains).

This analysis is just an exercise and does not reflect reality (except four Nouriel Roubini who really is a Perma Bear) since if you would have invested in the funds of some of these guys you probably would have done better than this graph lets you believe. Also, these guys change their minds & this isn't reflected in the graph.

you can read the whole piece here:

As the pinch of salt I would include this reflection from Jeremy Grantham in "Waiting for the last dance":

Liked by Matthew Lansing and 14 others

ARKK may be one of the most reflexive loops both to the upside and downside, since they are large shareholders in the ... this NOT going to be Janus Twenty 2.0?

Can Google actually do something new? 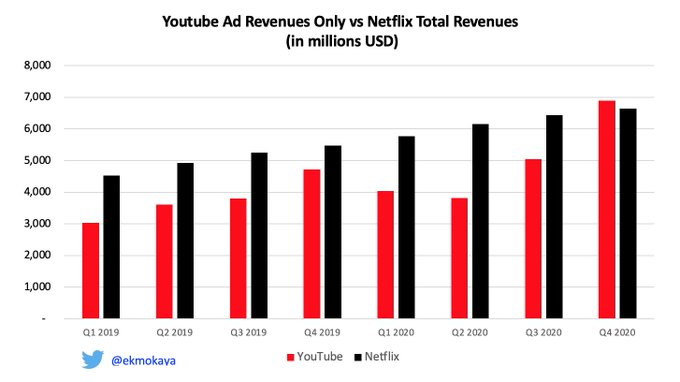 Revenue was 182,527 million in 2020, a 12% growth compared to last year. So, I am not worried they don't have good product-market fit. They dominate the space they are in but I am worried about them becoming super dull.

Yesterday it just hit me in the face as to how different Google is from Amazon. They reported on the same day and while both are admired I got to say it looks like the most innovative company is by far Amazon. And sure enough, if you would consider # of new patents as a proof, Amazon ranks 6 places higher than google (11vs17). In last night’s earnings, we saw Amazon share 6 pages of updates on al the different service launches and updates. 60+ bullet points in total. In comparison, the google Q4 looked super meek, just numbers.

On the same day, I saw that google ended Stadia (anyone into gaming must have noticed how they did their best to hype this). So I got a hunch, like wow, it has been a long time that Google launched a new product that is exciting & actually works. I am starting to think DeepMind is cool but it could very well turn into the IBM Watson 🤷‍♂️.

Google had this moonshot stuff now called "other bets". While revenue has been good, it hasn’t... (More)

Liked by Matthew Lansing and 3 others

Is this time different? Finding this price to sales chart reminded me of a great quote from Scott McNealy in the ... we be asking the same question in 2021?

This is the quote from Scott McNealy, co-founder, Chairman & CEO of Sun Microsystems from 1996 to 2006:

Liked by Bradley Snyder and 2 others